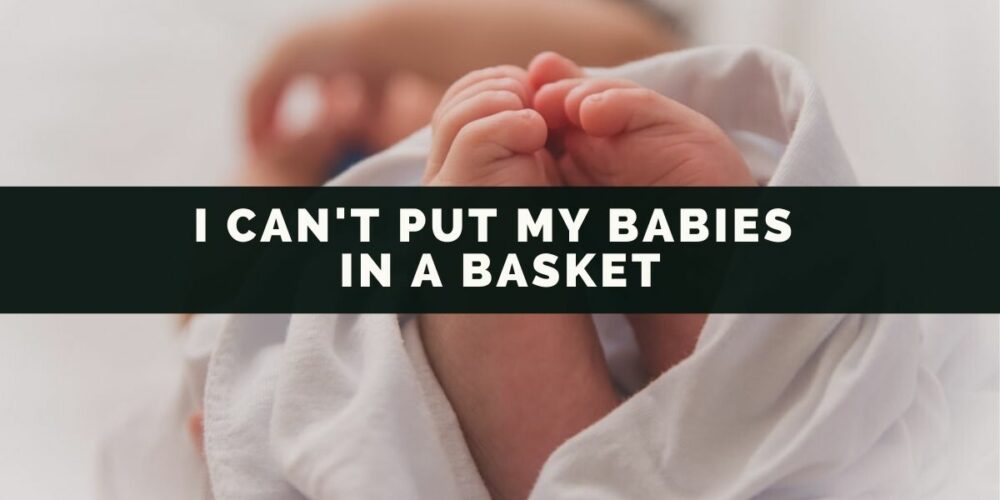 My wife does not write often, but when she does, she cuts to the heart. Many friends of hers on Facebook have already had the opportunity to read this and it has received so many encouraging comments that I felt it needed a life outside of her Facebook page. For all you mom's out there...

I can't put my babies in a basket.

I've always struggled with the idea of being away from my children. We had them for 7 years before I even did an overnight away from them. Even then I struggled to drive one hour away and spend the night apart from them. I am not sure why my heart grips them so tightly. Perhaps it was the years of infertility. Perhaps it was the 18 months they lived in our home while we pursued custody. Every "restricted" call or unexpected knock made my heart choke with worry that this was the day they would be taken back. Even now that they are adopted and officially ours, it is still difficult for me to be away from them.

When Logan was 4 years old, he and Grace were home with Joe on a Friday while I was at school. I remember Marlene calling my room to say that Joe was on the phone. He was crying and said that an ambulance had taken Logan away, and Joe said Logan was unable to breathe and not sure if he would be okay. I remember running out of school, driving as fast as I could while calling the dispatcher to get word about my son. He was alone in an ambulance with strangers, because there was no time for Joe to go as they ran out with Logan, since he had to wait for mom to care for Grace. The dispatcher said that I should just get to the hospital as soon as I could. It turned out that Logan had experienced a seizure. He had never had one before or since. He was released that night. I remember how fear had gripped me then and many times since that I cannot control the fate of my children. No matter how much I try to protect them, life brings situations beyond my control. I cannot always be with them, but He can.

Recently, I have been talking with friends who are packing up their kids for college with mixed emotions. I have been thinking about the start of another school year and letting my children spend their days with many other people without me. Joe and I are approaching our tenth anniversary. He just booked our anniversary get away for three nights. I know many parents who leave their kiddos for a week or more and some even go far way, but I always feel like I can't breathe.

Today I was reading about Moses. His parents could not protect him. The only choice left was for his mom to put baby Moses in a basket and let him float away from her down the Nile River. I could throw up just imagining that scene. So many things could have gone wrong, yet this mom trusted God and let her baby float away.

I wish I could end this story telling you that my heart has loosened its grip, but in reality I still have a white knuckled heart praying daily for the Lord to help me trust that He loves my children far more that I could ever love them. He made them mine for a season. He has entrusted me to parent them well, but they belong to Him. I need to trust that He will always hold them in the palm of His hand, which is far greater than the grip of my white knuckled heart.

So for all you Mama's who may be struggling to watch your children grow and wander from you, I will be praying for us all. Praying that we can place our little ones in their baskets and trust that He holds them in the palm of his hand. Meanwhile, reminding ourselves to breathe.